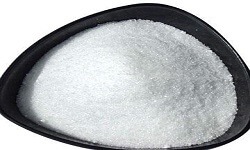 Sodium erythorbate (C6H7NaO6) is a food additive used predominantly in meats, poultry, and soft drinks. Chemically, it is the sodium salt of erythorbic acid. When used in processed meat such as hot dogs and beef sticks, it increases the rate at which nitrite reduces to nitric oxide, thus facilitating a faster cure and retaining the pink coloring. When used as a food additive, its E number is E316. Sodium erythorbate is produced from sugars derived from different sources, such as beets, sugar cane, and corn through fermentation.

It is produced through using D-glucose fermentation of Pseudomonas fluorescens Kl005 or Arthrobacter globiformis K1022 to produce 2-keto-D-gluconic acid (or calcium salt), followed by being esterified, transformed and refined. The composition of the fermentation medium is: glucose: 18; yeast extract 0.3; K2HPO4 • 3H2O: 0.05; KH2PO4: 0.05; MgSO4 • 7H2O: 0.025,;CaCO:34.5. The fermentation temperature is controlled at 30~35 â„ƒ, the fermentation period is 30h, and the fermentation conversion ratio (%) is 79.9%. The fermentation broth is supplemented with sulfate and activated carbon for acidification and decoloring, followed by pressurized filtrate to obtain the clean liquid with a yield of 96.6%.

The purified fermentation broth was concentrated by decompression, and methanol and sulfuric acid were added for refluxed esterification of 5h, followed by frozen and centrifuged filtering to obtain methyl ester with a yield of 82.1%. The methyl ester was transformed with basic methanol solution under refluxing conditions, and the product was further frozen and crystallized to dryness to obtain the crude product of D-isoascorbic acid. The conversion yield was 87.3%, and it was dissolved in hot water and decolorized with activated carbon. The filtrate is pressurized filtrated and the supernatant liquid is frozen, crystallized, centrifugalized, washed and vacuum dried to obtain finished product.

The mother liquid is recovered and the yield is 88.0%.

Food Industry
Sodium erythorbate is used in meats, poultry, and soft drinks. When used in processed meat such as hot dogs and beef sticks, it increases the rate at which nitrite reduces to nitric oxide, thus facilitating a faster cure and retaining the pink coloring. As an antioxidant structurally related to vitamin C, it helps improve flavor stability and prevents the formation of carcinogenic nitrosamines.

Other Applications
Sodium Erythorbate is now been used as general anti-oxidant for its high efficiency in metal processing to inhibit corrosion. It is used as oxygen absorber in industries, as boiler oxygen scavenger, for photographic developing, as hair dye and reaction-catalyst in resin polymerization.