The industrial production of 2-ethylhexanol is by a three-step process involving the aldol self-condensation of n butyraldehyde followed by dehydration and hydrogenation. The n-butyraldehyde was originally obtained
from acetaldehyde via ethylene but this has been superseded by the oxo process from propylene.

2-ethylhexanol also frequently applied as a low volatility solvent as well. When combined with nitric acid, 2-ethylhexanol can also be used to increase cetane. Additionally, it used to interact with epichlorohydrin and sodium hydroxide to form the molecule's glycidyl ether, which is used as an epoxy reactive diluent in a variety of coatings, adhesives, and sealants applications 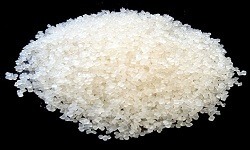