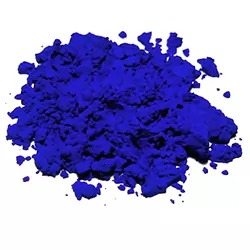 Cylindrical in shape with brown colour

Ultramarine blue is obtained from the mineral Lapis Lazulie, a complex compound of sodium, calcium, aluminium, silicate sulphate. The blue color of the pigment is due to sulphur radical ion. The name ultramarine was derived from Latin meaning “beyond the sea”, because it was imported from Afghanistan mines in the 14th and 15th century. Ultramarine pigment has also be termed "Gmelin's blue", "Guimet's blue", "New blue", "Oriental blue" and "Permanent blue".

The first operation in the Dry Process consists of heating the china clay in the calciner. After the soda ash (sodium carbonate) and the sulphur have been introduced into the clay, pebbles are added to the mixture which is then agitated by high-speed rotation in a cylindrical vessel. To make loading into the kiln easier, the mixture is formed into rectangular blocks, called "bricks" because they are roughly the same size as a house brick. The temperature inside the kiln is initially raised to 800°C and it is allowed to cool naturally.

When the temperature reaches 400°C, reactions take place, the polysulphide chains form and the pigment is produced. The bricks turn from beige to blue in the later stages of cooling. After unloading from the kiln, the bricks are crushed to allow purification of the pigment to take place in the Wet Process.

The impure ultramarine taken from the kiln contains sodium sulphite and sodium sulphate, formed by reaction of sulphur and sodium carbonate in the original mixture. Both compounds are white and, if they are allowed to remain in the ultramarine, they would lessen the colouring power of the pigment. The pigment is then removed from the aqueous solution of the sodium salts in a rotary vacuum filter. The solids residue from the filter cloth is mixed with more water and is broken up by adding pebbles and rotation of the slurry in a ball mill followed by further grinding in high-speed bead mills. Separation into sizes appropriate to various applications is called classification and involves the use of a series of continuous decanter centrifuges. The final three stages of the process are drying, blending of grades to meet customer requirements, and packing.

Ultramarine is used in the coloring of plastics because it is environmentally-friendly, easily dispersed, opacity, insolubility, weather fastness, to name a few. It provides a unique undertone of blue color which is used to tint whites, greys, and blacks. The fine particles of the ultramarine also help in maintaining the dimensional stability of the polymers.

Ultramarine Blue is used in inks because of its inorganic pigment nature. They show excellent resistance to organic solvents. Properties like good light resistance and low oil absorption make this pigment suitable for formulating different types of inks.

Ultramarine Blue is able to enhance the whiteness of textile fibers because it absorbs yellow wavelengths and does not reflect them, making the fabric looks whiter due to such an effect. Because of the lowest particle size of the Ultramarine Blue and its water affinity, it can be eliminated with further washings, forming a little structure with repeated washes and rinses.

In general, Ultramarine blue is widely used as a pigment in many applications. In the construction industry, it is used in blue coloration of cements because it does not change the mechanical properties of the final material. It is used in the cosmetics industry in foundation, face powders and eye shadows to improve aesthetics. They are used in printing industry in letterpress and flexography. It is used to raise the hue of paper.