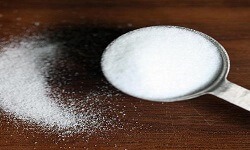 Manufacturing Process
Sulfamic acid is produced industrially by the treatment of urea with a mixture of sulphur trioxide and sulphuric acid. This happens in two stages, and each stage can be described in the following way:
OC(NH2)2 + SO3 → OC(NH2)(NHSO3H)
OC(NH2)(NHSO3H) + H2SO4 → CO2 + 2 H3NSO3

Food Industry
Sulfamic acid is mainly a precursor to sweet-tasting compounds and hence it is used as sweeteners in the food industry.

Cleaning Agent
It is used as an acidic cleaning agent, especially for metals and ceramics. It is used to remove rust and lime scale. It is a common household descaling agent. It is also used in industrial cleaning of dairy and brew-house equipment. It is also present in denture cleaners.

Other Applications
It is used as a catalyst for esterification process, used in dye and pigment manufacturing, as a herbicide, a coagulator for urea-formaldehyde resins, as an ingredient in fire extinguishing media, as a raw material for ammonium sulfamate, in the pulp and paper industry as a chloride stabilizer, in the synthesis of nitrous oxide by reaction with nitric acid, in electroplating as a counter ion for nickel, and in polishing silver.