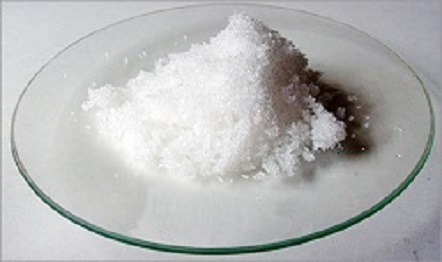 Sodium nitrate exist naturally in Chile and Peru. It is a white solid with the formula of NaNO3. It is very soluble in water and is also a good source of nitrate anion, which is greatly used by many industries. Being available as a natural resource, sodium nitrate is mined extensively to meet its huge demand till the 20th century.

Nitrate salts are bounded within the mineral caliche ore and serves as the main source of sodium nitrate till the 20th century. German chemist Fritz Haber and Carl Bosch developed a process to synthesize nitrate on an industrial scale.

Method 2: Haber Process: Sodium nitrate is manufactured on an industrial scale using hydrogen and nitrogen gas, with the presence of CaO catalyst. As the reaction is exothermic, it is thermodynamically favorable under low-pressure conditions of 200-atmospheric pressure. Using this process, ammonia is manufactured and can be converted to nitrate easily through the process of nitrification.

Textile Industry: Sodium nitrate is used in dyeing and printing of textiles. It is used in the manufacture of azo dyes and for oxidizing dyeings and prints with leuco vat dyes. It is a versatile bleaching agent for cellulosics, synthetics and blends, especially poly-cotton blends. It is also safe for those synthetic fibers which are sensitive to alkali. Sodium Nitrate is non-sensitive metal ions and hard water under acidic conditions.

Food Industry: Sodium nitrate is also a food additive used as a preservative and color fixative in cured meats and poultry. It is listed under its INS number 251 or E number E251. It is approved for use in the EU, USA and Australia and New Zealand.