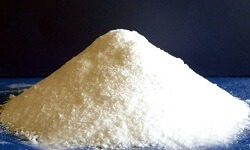 Sodium Hypophosphite (or Sodium Phosphonate) is a white inorganic powder having the chemical formula NaPO2H2. It is the salt of the Sodium compound of Hypophosphorous Acid and normally exists in the monohydrate form. It is soluble in water, has the ability to absorb air moisture, and when heated till its decomposition temperature it tends to give off Phosphine gas which is very toxic.

White phosphorous and slaked lime are dispersed a water medium and are heated in the presence of an inert gas medium at the melting point temperature of Phosphorous. Then Caustic soda is added to the dispersed solution mixture while it is being heated after which the solid components are separated from the liquid. The liquid is combined with phosphoric acid after which a high purity solution of Sodium Hypophosphite solution is recovered.

Coating Industry
Sodium Hypophosphite is most widely used for Electroless Nickel (or EN) Plating in the form of a solution with other compounds. It plays the vital role of a reducing agent in order to supply enough electrons for the EN process. This type of plating is widely useful in the Aviation, Avionics, and Petroleum Industries for coating objects with irregular surfaces.

Sodium Hypophosphite also finds usage as a raw material for the production of products such as Hypophosphorous Acid, etc.

Other Applications
It is used in chemical processing as an antioxidant or reducing agent, analytical reagent, catalyst for polymerization reactions, and also as a fire retardant.