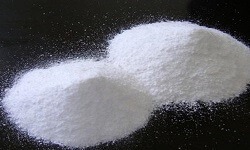 In the 19th century, research on fluoride and its occurrence in teeth and bones was carried out by physicians and chemists in Europe while the dental profession was still not organized as we know it today. The analytical methods of the time were quite limited and the results rather controversial.

Sodium fluoride is an ionic compound with the formula NaF. This colorless solid is the main source of the fluoride ion in diverse applications. NaF is less expensive and less hygroscopic than KF, but otherwise the potassium salt is more widely used.

It is used in the treatment of osteoporosis. It improves bone strength and stimulates bone formation. It is also used as a tracer in medical imaging techniques.

Sodium Fluoride is added to drinking water and toothpastes for dental health. Fluoride salts are used to enhance the strength of teeth by the formation of fluorapatite, a naturally occurring component of tooth enamel.

Other Applications
It is used as a cleaning agent, stomach poison for plant-feeding insects, chemical synthesis. Sodium fluoride is used in the manufacturing of steel and aluminum metals. It's also used as a metal surface treatment and cleaning agent, for glass frosting, as a wood preservative, and for pH adjustment in industrial textile processing.