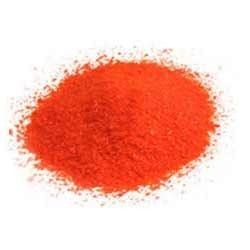 Sodium Dichromate is the inorganic compound with the formula Na2Cr2O7. Usually, however, the salt is handled as its dihydrate Na2Cr2O7·2H2O. Virtually all chromium ore is processed via conversion to sodium dichromate and virtually all compounds and materials based on chromium are prepared from this salt. In terms of reactivity and appearance, sodium dichromate and potassium dichromate are very similar. The sodium salt is, however, around twenty times more soluble in water than the potassium salt (49 g/L at 0 °C) and its equivalent weight is also lower, which is often desirable.

Sodium Dichromate is produced on a large scale from ores containing chromium(III) oxides. The ore is fused with a base like sodium carbonate, at around 1000°C in the presence of air (source of oxygen):

This step solubilizes the chromium and lets it to be extracted into hot water. Acidification of the resulting aqueous extract with sulfuric acid or carbon dioxide affords the dichromate:

The dichromate is obtained as the dihydrate through crystallization.

Metallurgy Industry
Sodium dichromate is used to improve the corrosion resistance of various coatings on metals. They are used in etching and bright-dipping of copper and its alloys. In addition to this, they are used to prevent metal corrosion in recirculating water systems. It is used as corrosion inhibitor for cooling systems in locomotive diesels and automobiles.

Environmental Usage
It is used in fire-retardant formulations to prevent leaching of the fire retardant from the wood and corrosion of the equipment that is used. After impregnation of wood the sodium dichromate compound used in formulation, react with the wood extractives and the other preservatives salts to produce relatively insoluble complexes from which preservatives leaches only very slowly.

Other Applications
Sodium dichromate is used as an oxidant and source of chromium in textile industry to dye wool and synthetics with mordent acid dyes, oxidized vat dyes and indigo sol dyes on wool. It is used in petroleum and natural gas industries for drilling muds. It is also used in pharmaceuticals like Brufen drugs. It can be used to manufacture saccharine. It is used as a ferromagnetic material in high fidelity magnetic tapes and is also used for hardening gelatin. Further it used in electric batteries, bleaching fats, oil sponges and resins. Moreover, it is used as an oxidizing agent in manufacturing of dyes, many other synthetic chemicals, and ink. It is used in the manufacturing of chromic acid and chrome pigments.